"Saving All My Love for You" is a song written by Michael Masser and Gerry Goffin with arrangement by Gene Page. It was originally a minor hit for Marilyn McCoo and Billy Davis Jr. in 1978 on their album Marilyn & Billy. A cover of the song was recorded by American singer Whitney Houston, for her debut, self-titled album, which was released on February 14, 1985, by Arista Records. The song was the second single from the album in the United States and third worldwide.

The song received positive reviews from music critics, who picked it as one of the album's highlights and praised its melodious production and Houston's vocal performance. The song won the Grammy Award for Best Female Pop Vocal Performance. Commercially, the song topped the Billboard Hot 100, being her first number one on the charts; it also went to number one in both the UK and Ireland, becoming her first major hit in these countries. In the United States, it was awarded a Gold certification from the RIAA in 1995, and Platinum certification in 2020.
Whitney performed "Saving All My Love for You" in a number of places. Whitney performed the track for the 28th Annual Grammy Awards and later took home the Best Pop Vocal Performance, Female Award for the song.[27] Her performance of the ballad at the GRAMMYs won her an Emmy for Outstanding Individual Performance in a Variety or Music Program.[28] She also performed the song on Late Night with David Letterman in 1985. The performance was considered one of her best live performances by Digital Spy and VH1. While Liam O'Brien of Digital Spy wrote, "In this assured performance on Late Night With David Letterman, her vocal gymnastics left the host stunned,"[29] Mark Graham of VH1 simply picked it as her third best live performance.[30] 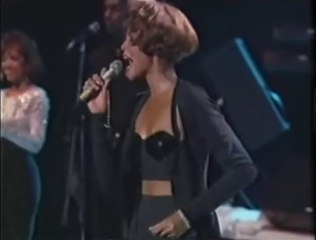 "Saving All My Love for You" is a song written by Michael Masser and Gerry Goffin with arrangement by Gene Page. It was originally a minor h...