What Will We Leave for the 7th Generation? By Ann M. Wolf

Video Description: "What Will We Leave for the 7th Generation?" ( With Lyrics)

On wings of soaring eagles and to the heartbeat of soul-stirring & rhythmic music, journey deep into the world of Native American spirituality; this video explores the question stated in the title of the song. Ann sings about our life's purpose with regard to leaving a legacy of love & good works which future generations can benefit from, a mission which would include the preservation of our beautiful planet as well as becoming responsible & caring stewards of all resources.

"In every deliberation, we must consider the impact on the Seventh Generation." Iroquois Teaching

Ann was profoundly influenced by this statement many years ago during her years with Native American events, leaders, artists, & elders; and this eventually led to the writing of the "7th Generation" song which was first recorded in the late 80s becoming the title cut of an album by the same name. Having re-recorded the song this Spring (2016), it holds a place in the lineup of tracks in her album, "Redemption."

"NEVER BROKEN" VIDEO: The extended version of this song is the soundtrack for the video, "Never Broken," dedicated to Native American CODE TALKERS, honoring them for their invaluable contribution to Freedom.

Ann also recognizes two of her Native American teachers in this video, Twylah Nitsch & Sun Bear whom she walked & served with, among other leaders, in her earlier years as a songwriter & spiritual teacher.

NOTE: This Video is offered for the purpose of inspiration & education; images & music are either original by Ann M. Wolf or are used by permission, by license, with some images having been obtained from (what the artist believes) are public domain sites. Please advise if any images require additional licenses or permissions. Thank you.

What Will We Leave for the 7th Generation? By Ann M. Wolf 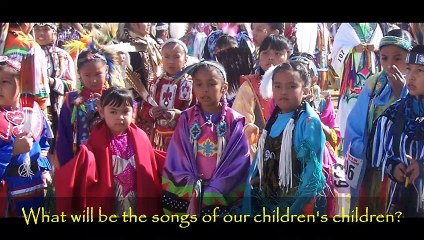 Video Description: "What Will We Leave for the 7th Generation?" ( With Lyrics) On wings of soaring eagles and to the heartbeat of soul-stirr...