Up the MacGregors - The Macgregor family is back and this time they have their women with them, in the hunt for the men who have stolen their gold.

Storyline:
The Macgregor family is back and this time they have their women with them, in the hunt for the men who have stolen their gold.

Reviews:
"The families of MacGregor, who has 7 sons, and Donovan, who has 7 daughters, are next door neighbors in the Wild West. When bandits steal the treasure of the Mac Gregors, the sons go to retrieve it. The story is rather simple, mainly an excuse for many fights, including the pretty ladies who are not to be underestimated. The families' parties after the fights, however, are almost as dangerous as the fights were! But the strength of this sequel to "7 Guns for the MacGregors" is that it is never as silly as later Italian western comedies in the 70s, because the action scenes are well staged, edited and photographed, for example the fight on the locomotive is something any serious western movie would be proud of. Editor Nino Baragli previously did nothing less than "The Good, the Bad and the Ugly". Also the villain (Leo Anchoriz) is portrayed quite seriously, some brutal scenes - for example when he shoots some of his gang members - are not what you'd expect in a comedy.

It's the combined qualities of the comedy and action scenes that make this movie great fun from the first to the last minute. Most people praise this sequel less than the first movie "7 Guns for the MacGregors", but for me, it's absolutely on the same quality level, just like the Morricone soundtrack." Written by unbrokenmetal on IMDb.com.

Warning: Spoilers
"This is not a well-regarded example of the spaghetti genre, but for my money it's pretty good and is certainly entertaining. In this outing, the evil Maldonado (Leo Anchoriz, channeling the spirit of Timothy Carey) steals the MacGregor family gold, and it's up to the seven brothers to reclaim it. The film consists of wall to wall action, all of it extremely well-staged, and Alejandro Ulloa's cinematography is outstanding. The incessant theme song returns from the first film (Seven Guns For the MacGregors) but thankfully it isn't overused quite as much this time. Also of note is the return of actor Victor Israel as a traveling dentist--he played the morbid pianist in Seven Guns--and also that of beautiful Agata Flori, who reprises her role as Rosita, the wife/fiancée of brother Gregor (Another World's David Bailey, replacing Robert Woods). If you've only ever seen this in pan and scan or on a bootleg, splash out for a copy of the Ripley Home Video PAL disc--as with their release of Seven Guns, the transfer is near flawless. It may not be art, but it sure is fun." Written by JohnSeal on IMDb.com. 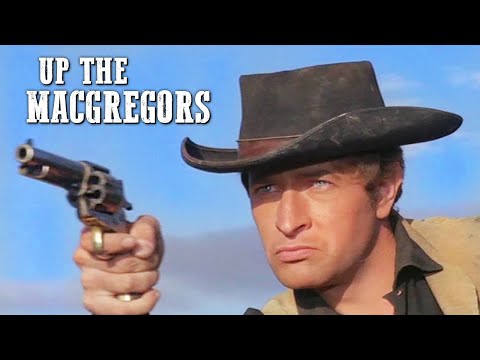 Up the MacGregors - The Macgregor family is back and this time they have their women with them, in the hunt for the men who have stolen their gold. Up...