Lakshmi Vandhachu (English: Lakshmi has come) is a 1986 Indian Tamil-language drama film directed by Rajasekar. The film stars Revathi in title role with Sivaji Ganesan and Padmini in the lead. The film was a remake of the 1981 Hindi film Khubsoorat.[1] Actress Meena acted as a child in this movie.
Rajeshwari(Padmini) is the strict disciplinarian of the family that keeps everyone under her control - particularly her husband Rajasekar (Sivaji Ganesan). Her four sons live by her rules without question. When her second son marries, his new wife's younger sister Lakshmi (Revathi) comes to stay with the family. Lakshmi's carefree and easy going attitude endears her to family but puts her at odds with Rajeshwari. Raja, (Nizhalgal Ravi) the family's third son and Lakshmi also fall in love. One of Lakshmi's pranks pushes Rajeshwari to her limit and creates fissures in the family. A crisis eventually sets things in motion to solve all the problems.
Soundtrack was composed by Raveendran.
The Indian Express wrote "To such a goody goody tale, the Tamil version adds its own brand of gutter humour, which instead of tickling the ribs, leaves wounds on the sides".

Please Subscribe Our Channel : https://www.youtube.com/channel/UC_M0i9lF3YNNKATe7frqQSA?view_as=subscriber
THANK YOU FOR SUBSCRIBER & KEEP WATCHING OUR CHANNEL 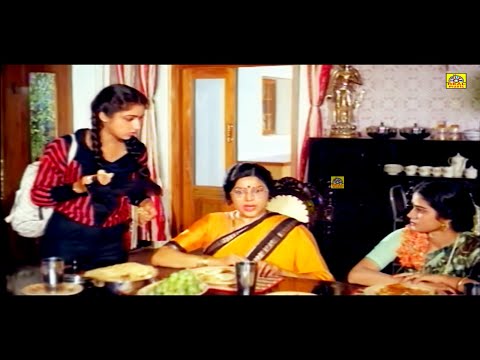