Silver Lode - In Silver Lode, Dan Ballard is arrested by 4 Marshals for murder and theft but he denies the charges and searches for the real culprit even as the townsfolk start abandoning him.

Storyline:
Dan Ballard, a respected citizen in the western town of Silver Lode, has his wedding interrupted by four men led by Fred McCarty, an old acquaintance who, as a US Marshal, arrests Ballard for the murder of his brother and the theft of $20,000. Ballard seeks to stall McCarty while tracking down evidence that will prove his innocence: but the townspeople's loyalty to him gradually begins to waver under McCarty's accusations.

Reviews:
"The action starts with Dan and three other riders (Harry Carey Jr and Alan Hale Jr for gosh sakes... you know you're in for a good time) riding into the town of Silver Lode on forth of July. They're looking for the man named "Dan Ballard" but everyone they ask gives them the cold shoulder, one remarks they know a gunfighter when they see one. Turns out Dan is a federal marshal named Ned McCarty (other reviews have noted the McCarthy similarity and I agree with them on that) come to take Ballard -- solidly played by John Payne -- prisoner back to California for a murder rap. The victim is, it turns out, McCarty's brother and there is also a matter of $20,000 stolen at the same time.

At first the town's people are solidly behind Ballard but gradually they come around to bow McCarty's assumed authority and turn against Ballard. This is done rather well, not nearly as heavy handedly as might be. Many reviewers have noted the similarity to "High Noon", it's sort of a "High Noon" in reverse. While that's mighty high company the comparison is not out of line and the wonderful direction of Allan Dwan makes up for the lower production values. This is a good story, well made and worth looking for." Written by smorrow2-1 on IMDb.com.

"Some have claimed how "impossible" it is not to compare this with "High Noon". I haven't seen "Noon" in years but this film was fresh in every way. Just to think of it - here is a collaborator with D. W. Griffith who has made more films during his successful career than any ten directors combined - and many of them Westerns! He was wowing audiences with his technical know-how long before "High Noon" was a twinkling in anyone's eye. How much the villain and McCarthy have in common is more in the domain of the scriptwriter than the director, perhaps - after all, the scriptwriters got the shaft more often than anybody else during the witch hunts. This is a lively tale and it moves quickly. The colors are wonderful and the tracking shots vivid. Come to think of it, I might just prefer it. It doesn't talk itself to death, but neither do the other Dwan films I've seen over the years." Written by cstotlar-1 on IMDb.com. 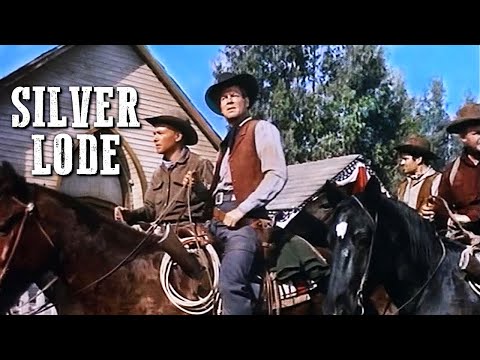 Silver Lode - In Silver Lode, Dan Ballard is arrested by 4 Marshals for murder and theft but he denies the charges and searches for the real culprit e...