Mary Jane Blige (/blaɪʒ/; born January 11, 1971)[4] is an American singer-songwriter, actress, and philanthropist. Her career began in 1991 when she was signed to Uptown Records.[1] She went on to release 13 studio albums, eight of which have achieved multi-platinum worldwide sales. Blige has sold 50 million albums in the United States and 80 million records worldwide. Blige has won nine Grammy Awards, four American Music Awards, twelve Billboard Music Awards and has also received three Golden Globe Award nominations, including one for her supporting role in the film Mudbound (2017) and another for its original song "Mighty River". Furthermore, she also received a nomination for the Academy Award for Best Supporting Actress and Best Original Song, becoming the first person nominated for acting and songwriting in the same year.
In 2017, Blige starred in the period drama film Mudbound directed by Dee Rees. Playing Florence Jackson, the matriarch of her family,[86] she received praise such as Variety's review: "Mary J. Blige, as the mother of the Jackson family, gives a transformative performance that will elevate the acting career of the R&B star."[87] For her performance in Mudbound, Blige was nominated for the Golden Globe Award for Best Supporting Actress,[88] the Critics' Choice Movie Award for Best Supporting Actress, the Screen Actors Guild Award for Outstanding Performance by a Female Actor in a Supporting Role, and the Academy Award for Best Supporting Actress. As she was also nominated for the Academy Award for Best Original Song (with Taura Stinson and Raphael Saadiq), she became the first person nominated for an Academy Award for acting and original song in the same year.[89][90] Her nomination also made Dee Rees the first black woman to direct a film for which an actor was nominated for an Academy Award.[91][92]

Blige voiced Irene Adler in the 2018 animated film Sherlock Gnomes, and in 2020 voiced Queen Essence in the animated musical film Trolls World Tour. In 2018, it was announced that Blige was cast as Sherry Elliot in the third season of the slasher television series Scream.[93] The season premiered on VH1 on July 8, 2019.[94] In 2019, Blige starred in the role of Cha-Cha, a main antagonist in the Netflix superhero series The Umbrella Academy.[95]

Blige played a leading role in the upcoming horror film Body Cam.[96] She starred in the independent drama film Pink Skies Ahead that will premiere at the 2020 South by Southwest film festival.[97][98] She played singer Dinah Washington in the biographical drama film Respect about life and career of Aretha Franklin.[99] The film is scheduled to be released theatrically on January 15, 2021. In late 2019, Blige began production on an untitled documentary about her life and career directed by Vanessa Roth.[100] Blige stars as Monet Stewart in Power Book II: Ghost, the first spin-off for the highly rated Starz cable drama Power which premieres in September 2020. 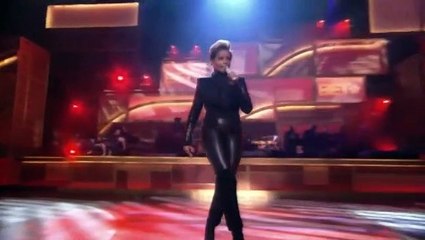