Mahalia Jackson (/məˈheɪliə/ mə-HAY-lee-ə; born Mahala Jackson; October 26, 1911 – January 27, 1972) was an American gospel singer. Possessing a contralto voice,[1] she was referred to as "The Queen of Gospel".[2][3] She became one of the most influential gospel singers in the world and was heralded internationally as a singer and civil rights activist.[4] She was described by entertainer Harry Belafonte as "the single most powerful black woman in the United States".[4] She recorded about 30 albums (mostly for Columbia Records) during her career, and her 45 rpm records included a dozen "golds"—million-sellers.

"I sing God's music because it makes me feel free", Jackson once said about her choice of gospel, adding, "It gives me hope. With the blues, when you finish, you still have the blues.
Jackson died on January 27, 1972, at Little Company of Mary Hospital in Evergreen Park, Illinois, of heart failure and diabetes complications.[4] Two cities paid tribute: Chicago and New Orleans. Beginning in Chicago, outside the Greater Salem Baptist Church, 50,000 people filed silently past her mahogany, glass-topped coffin in final tribute to the queen of gospel.[35] The next day, as many people who could—6,000 or more—filled every seat and stood along the walls of a city public concert hall, the Arie Crown Theater of McCormick Place, for a two-hour funeral service. Her pastor, Rev. Leon Jenkins, Mayor Richard J. Daley and Mrs. Coretta Scott King eulogized her during the Chicago funeral as "a friend – proud, black and beautiful".[35] Sammy Davis Jr. and Ella Fitzgerald paid their respects. Joseph H. Jackson, president of the National Baptist Convention, U.S.A., Inc., delivered the eulogy at the Chicago funeral. Aretha Franklin closed the Chicago rites with a moving rendition of "Precious Lord, Take My Hand".Jackson's music was played widely on gospel and Christian radio stations, such as Family Radio. Her good friend Martin Luther King Jr. said, "A voice like this one comes not once in a century, but once in a millennium."[39] She was a close friend of Doris Akers, one of the most prolific gospel composers of the 20th century. In 1958, they cowrote the hit "Lord, Don't Move the Mountain". Mahalia also sang many of Akers' own compositions such as "God Is So Good to Me", "God Spoke to Me One Day", "Trouble", "Lead On, Lord Jesus" and "He's a Light Unto My Pathway", helping Akers to secure her position as the leading female Gospel composer of that time. In addition to her singing career, she mentored the legendary soul singer Aretha Franklin. Jackson was also good friends with Dorothy Norwood and fellow Chicago-based gospel singer Albertina Walker, and she discovered a young Della Reese. On the 20th anniversary of her death, Smithsonian Folkways Recording commemorated her with the album I Sing Because I'm Happy, which includes interviews about her childhood conducted by Jules Scherwin. 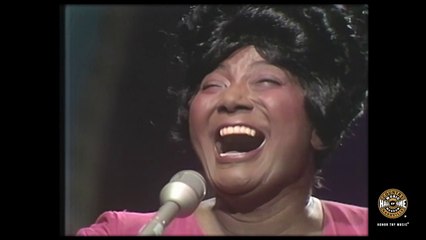