Beverley Knight, MBE (born Beverley Anne Smith; 22 March 1973) is an English recording artist and musical theatre actress who released her debut album, The B-Funk, in 1995. Heavily influenced by American soul music icons such as Sam Cooke and Aretha Franklin, Knight has released eight studio albums to date. Widely labelled as one of Britain's greatest soul singers,[1] Knight is best known for her hit singles "Greatest Day", "Get Up!", "Shoulda Woulda Coulda" and "Come as You Are".
The first single to be released from the album was "Mama Used to Say", a hit single originally recorded by Junior Giscombe. The single was released on 27 June 2011, with the album following on 4 July. The album was the highest new entry on the UK albums chart in its week of release, peaking at #13.[27] Three further singles were released from Soul UK, "Cuddly Toy" (originally by Roachford), "One More Try" (originally by George Michael) and "Round and Around" (originally by Jaki Graham). Other artists whose songs were covered on Soul UK include: Soul II Soul; Loose Ends; Omar; Jamiroquai, with whom she had previously recorded the song "Main Vain" with; Princess; Lewis Taylor; Heatwave; Freeez; and Young Disciples
On 9 September 2013,[29] Knight took over the role of Rachel Marron (played by Whitney Houston in the original 1992 film) from performer Heather Headley in the musical adaptation of The Bodyguard.[30] Knight was nominated for Best Takeover in a Role at the Whatsonstage.com Awards as a result.[31] Her run performing the role finished on 31 May 2014.On 27 October 2015, it was announced that East West Records had signed Knight to release her eighth studio album, Soulsville, which was released on 10 June 2016. The album includes a duet with Jamie Cullum and features covers of classic soul songs by William Bell and Judy Clay, Big Mama Thornton, Sam & Dave, Ann Peebles and Ben E. King, as well as some original tracks co-written by Knight.[36] Upon release, Soulsville reached the Top 10 in the UK Albums Chart and the Scottish Albums Chart.Knight was one of the guest artists at a BBC Prom in 2017, celebrating the soul music of Stax Records. Alongside host Jools Holland, his Orchestra, James Morrison, Ruby Turner and Sir Tom Jones, the show also featured some of Stax's greatest living artists (William Bell, Booker T. Jones, Steve Cropper, Sam Moore and Eddie Floyd). Knight performed five times during the concert: "Sweet Soul Music" (with Jones and Morrison and again with the whole ensemble), "B-A-B-Y", duetted with Bell on "Private Number" and Moore on "Hold On, I'm Comin'". 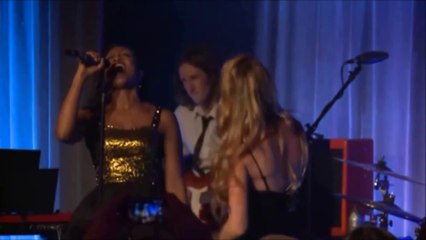