Gunfight at Red sands - An avenging stranger guns down a gang of ruthless bandits in revenge for the murder of his family.

Storyline:
An avenging stranger guns down a gang of ruthless bandits in revenge for the murder of his family.

Reviews:
"I had the chance of watching this great movie the other day. Everybody told me that it was a great "spaghetti-western", and I really believe it is. And I´ll tell you why. The movie plot is very intriguing, the rhythm is unbeatable, and it´s a story it could have happened somewhere in the west last century. It´s just wonderful, great. And by the way it´s also one of the first spaghetti-westerns. The great performances of Richard Harrison, Mikaela, Daniel Martín, and the rest of the cast make this movie absolutely delightful. And to boots the main title song called "A gringo like me" is one of the best pieces I´ve heard in a western of this kind: "Put your hand on your gun...don´t you trust anyone, there´s just one kind of man that you can trust, that´s a dead man... or a gringo like me..."." Written by f.gimenez on IMDb.com.

"Gunfight At Red Sands is an excellent early spaghetti western. It is probably the best pre-1964 eurowestern I have seen.

I wouldn't be surprised if this spaghetti was the one that started it all, as far as the style goes. The other early examples of the genre I have seen seem to be lacking in the defining characteristics that make these films so great, but this movie has all of the stylistic elements in place. The ultra-bleak depiction of life in the west, a couple of oddball off-kilter characters, a great music score (by the master, Morricone, no less), some great suspense-building camera work, a dramatic showdown, and lots of rousing action really make this one stand out.

The acting in the film is very good, and definitely above-average for a eurowestern. Richard Harrison is great in the role of "Gringo." Giacomo Rossi-Stuart also does an excellent job in the role of Sheriff Corbett. All of the other players are great as well. The character "Lisa," played by Sara Lezana, is one of the strongest female characters I have seen in a western. She's every bit as tough, and can shoot as well as any other character in the story, and she has a very prominent role in the most important action scenes of the film.

The story is a very engaging one, and it moves along at a really good pace. There are no slow parts or fillers in this movie. There is also a strong element of mystery, as Gringo has to do a fair amount of detective work to figure out who murdered his father.

All in all, this is a great movie that no spaghetti western fan should overlook." Written by spider89119 on IMDb.com. 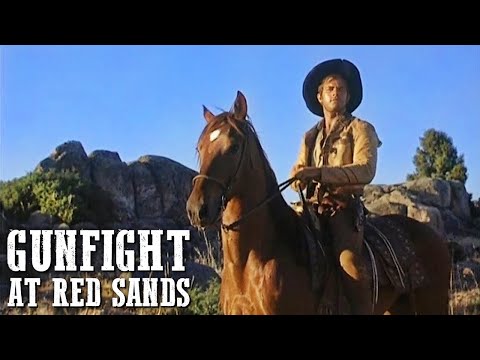 Gunfight at Red sands - An avenging stranger guns down a gang of ruthless bandits in revenge for the murder of his family. Gunfight at Red Sands (1963...