What’s better than discovering Disney Easter Eggs hidden in “Frozen 2”? Figuring out which scenes from Disney Princesses movies the filmmakers recreated in Anna and Elsa’s sequel, that’s what! Some of them are more obvious than others, with the best hidden ones only recognizable to true fans. Make sure you tell us how in the comments section how many you spotted while watching the movie. These “a-ha” moments are like the best Easter Eggs ever, proving that the Disneyverse really does love to link up its films. Want to see just how similar they are? We’re bringing you every moment from every Disney Princess film side-by-side with each of their “Frozen 2” recreations.

We’ve got Disney movie connections between the sequel’s settings in “Sleeping Beauty” and “Brave”, plus an important villain scene that’s recreated from “Beauty and the Beast”. Lots of these moments occur during songs, including Olaf’s “When I am older” — that’s a freaky “Snow White” scene. It’s super cute when you compare the opening with “The Princess and the Frog” when the characters are little kids. You won’t believe how alike they are. There’s an epic fashion scene from “Cinderella” (animated version) and a similarly sparkly scene from “Tangled” movie. Then there’s an adventurous move from the original “Aladdin” animation, and a blink-and-you’ll-miss-it link to “The Little Mermaid”. Hit play to see all of these scenes next to each other to get the full effect, and please subscribe to TheThings while you’re here to be notified when we upload our next videos. Thanks for watching! 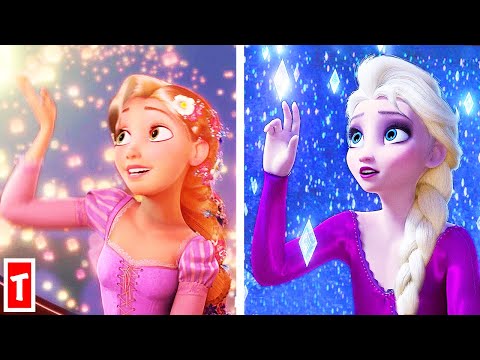