"Joy to the World" is a popular Christmas carol[1] with words by Isaac Watts. As of the late 20th century, "Joy to the World" was the most-published Christmas hymn in North America
The words of the hymn are by English writer Isaac Watts, based on Psalm 98, 96:11–12 and Genesis 3:17–18. The song was first published in 1719 in Watts' collection The Psalms of David: Imitated in the language of the New Testament, and applied to the Christian state and worship. The paraphrase is Watts' Christological interpretation. Consequently, he does not emphasize with equal weight the various themes of Psalm 98. In first and second stanzas, Watts writes of heaven and earth rejoicing at the coming of the King. An interlude that depends more on Watts' interpretation than the psalm text, stanza three speaks of Christ's blessings extending victoriously over the realm of sin. The cheerful repetition of the non-psalm phrase "far as the curse is found" has caused this stanza to be omitted from some hymnals. But the line makes joyful sense when understood from the New Testament eyes through which Watts interprets the psalm. Stanza four celebrates Christ's rule over the nations."[2] The nations are called to celebrate because God's faithfulness to the house of Israel has brought salvation to the world
Mariah Carey co-produced her cover of the song with Walter Afanasieff for her fourth album Merry Christmas. It interpolates Hoyt Axton's rendition of "Joy to the World". It was originally released as a promotional single in mid-November 1994 and an EP with commissioned remixes by David Morales was released the following year.[19] The song was later released on 27 November 1995 in Australia as the third single from the album.[20] Eventually, it peaked at number 33 in the aforementioned country.

Remixes and rerecordings
Several remixes were commissioned for the single, all of them by David Morales. In 2016, Carey rerecorded the song and shot a music video that featured James "Big Jim" Wright playing the piano, Carey's background singers and a choir as part of her "Christmas Gifts" digital campaign.

Live performances
"Joy to the World" was performed twice in 1994: it was included on the setlist of Carey's benefit concert at the Cathedral of St. John the Divine on 10 December 1994,[21] and was performed via satellite in New York City for TN Argentina on 10 December 1994.[22] It was later performed on BET's Christmas Remembrances Special in December 2001,[23] on the setlist for the second North American leg of Carey's Charmbracelet World Tour,[24] alongside several other Christmas songs such as "All I Want for Christmas Is You", "Silent Night" and "Hark! The Herald Angels Sing", at the 2004 Walt Disney World Christmas Day Parade,[25] on Carey's 2010 Christmas special "Merry Christmas to You"[26] to promote her second Christmas album, and at the annual Rockefeller Center Christmas Tree lighting in 2013.[27] The song was also included on the setlist of Carey's 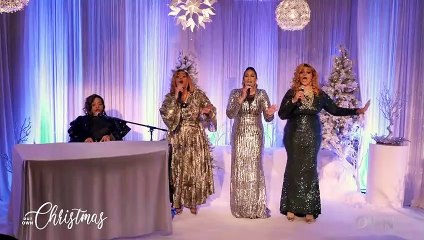