Jack Broadbent sits down for a One On One Session at Cafe Bohemia New York
For more info visit: http://www.jackbroadbent.co.uk Audio & Video by: Ehud Lazin

Setlist:
This Town
Too Late

Hailed as ’the new master of the slide guitar’ by the Montreux Jazz Festival and 'the real thang’ by the legendary Bootsy Collins, Jack Broadbent has spent the past few years wowing international audiences with his unique blend of virtuosic acoustic and slide guitar playing, as well as his poignant folk and blues inspired vocals. Born in rural Lincolnshire, Jack grew up listening to a diverse range of artists that included Radiohead, Robert Johnson, Joni Mitchell and Davey Graham. These acts influenced Jack’s distinctive songwriting singing, production and performance style, giving his music a depth and heart that defies strict genre. His live shows exude warmth, humour and an energy that has electrified audiences worldwide. Following a string of successful dates opening for artists such as Lynyrd Skynyrd, Johnny Hallyday, Peter Frampton, Robben Ford and Tony Joe White, Jack has since headlined a string of international tours, playing sold-out shows in the US, Europe, New Zealand, Australia, Japan and Canada. With four albums out to date, Jack is poised to release a brand new record in early November. ‘Moonshine Blue’ is produced by Jack himself and Bruce Cameron and contains a slew of musical surprises. With an already impressive fanbase and over 10 million streams on Spotify, the album will surely see his music reach an even wider audience. 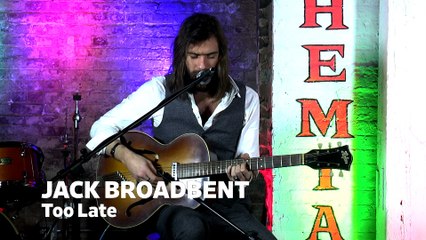 Jack Broadbent sits down for a One On One Session at Cafe Bohemia New YorkFor more info visit: http://www.jackbroadbent.co.uk Audio & Video by: Ehud L...