Eatin' With The Boogie
by Bulee Gaillard and his Southern Fried Orchestra; Gaillard; Norman Granz
Publication date 1952 ( Rhythm & Blues )
Performer: Bulee Gaillard and his Southern Fried Orchestra
Writer: Gaillard
Bulee "Slim" Gaillard (January 9, 1911 – February 26, 1991), also known as McVouty, was an American jazz singer and songwriter who played piano, guitar, vibraphone, and tenor saxophone.
Gaillard was noted for his comedic vocalese singing and word play in his own constructed language called "Vout-o-Reenee", for which he wrote a dictionary. In addition to English, he spoke five languages (Spanish, German, Greek, Arabic, and Armenian) with varying degrees of fluency.
He rose to prominence in the late 1930s with hits such as "Flat Foot Floogie (with a Floy Floy)" and "Cement Mixer (Put-Ti-Put-Ti)" after forming Slim and Slam with Leroy Eliot "Slam" Stewart. During World War II, Gaillard served as a bomber pilot in the Pacific. In 1944, he resumed his music career and performed with notable jazz musicians such as Charlie Parker, Dizzy Gillespie, and Dodo Marmarosa.
In the 1960s and 1970s, he acted in films—sometimes as himself—and also appeared in bit parts in television series such as Roots: The Next Generations.
In the 1980s, Gaillard resumed touring the circuit of European jazz festivals. He followed Dizzy Gillespie's advice to move to Europe and, in 1983, settled in London, where he died on 26 February 1991, after a long career in music, film and television, spanning nearly six decades.


Subscribe to our channel for the best music masterpieces: http://bit.ly/ClassicMoodExperience 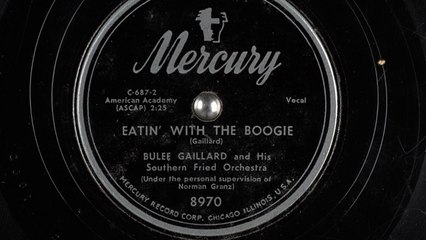 Classic Mood Experience The best masterpieces ever recorded in the music history. Join our Youtube: https://goo.gl/8AOGaN Eatin' With The Boogie by Bu...