Bob Boilen | September 28, 2020
It's been about a month since the release of the new Bright Eyes album. It's right about now that I likely would have seen Bright Eyes at the 9:30 Club here in D.C. Knowing that wasn't going to happen due to the pandemic, I'm thrilled to have Conor Oberst, Mike Mogis and Nate Walcott join "together" for a taste of live Bright Eyes. They recorded this Tiny Desk (home) concert with Conor and Mike at ARC Studios in Omaha, Neb., while Nate sits 1,500 miles away at Lucy's Meat Market, a well-equipped studio in Los Angeles filled with sweet-sounding vintage keyboards. Singing and seated behind him is Becky Stark, better known as Lavender Diamond, along with their daughter.

Despite the distance and the almost 10 years since their last record, the three songs they perform from Down in the Weeds, Where the World Once Was, are intense, with lyrics that are not always decipherable, filled with struggle and hope — in other words, the way I like them.

Conor has visited the Tiny Desk twice: first in 2014, when he brought his family and we invited kids for a memorable concert; and then in 2019 for a concert with Phoebe Bridgers as part of Better Oblivion Community Center. For this Tiny Desk (home) concert, he and the rest of Bright Eyes channeled that stripped-back rawness, and I think these songs shine for it. 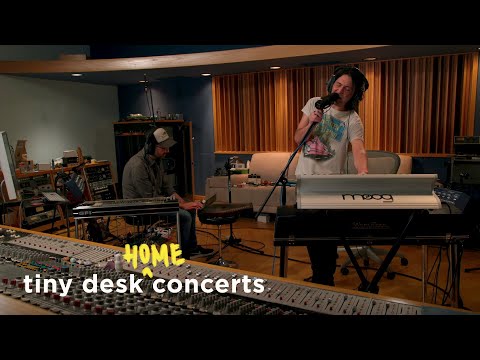