Happy Sunday night! Something I hope that will calm you, it worked for me! I had to get this one out there by tonight, it's my first Bob Marley remix and I hope you like, the sound of laid back reggae beats. I was listening to my 60's mix when I came across Desmond Dekker & The Aces "The Israelites" thought about remixing it when I remembered I had the Bob Marley and it just sounded so wonderfully calming I wanted to share it with you.


Bob Marley is undoubtedly the most famous voice of reggae. The music began in Jamaica and evolved in the late 60's from ska, calypso, rocksteady and R&B. His music became popular in the early 70's and the world began to listen to him.


Robert Nesta Marley was born February 6, 1945 in Nine Mile, Saint Ann Parish, Jamaica to parents Norval Sinclair Marley and Cedella Malcolm. He was 10 years old when his father died of a heart attack. He attended Stepney Primary school and then Junior High School in the Saint Ann parish where he met Neville Livingston a fellow musician who would become Bunny Wailer. The family moved to Trenchtown, Kingston when Bob was 12 and she married Thadeus Livingston, the father of his friend Neville.


This brought the two closer together and they discovered their love of ska and US R&B music and began their musical legacy as vocalists in a vocal group that contained Bunny Wailer, Peter Tosh, Beverley Kelso and Junior Braithwaite. It was at this time that Marley took up the guitar from Joe Higgs.


He recorded his first four songs in 1962 and then the following year they renamed themselves "The Teenagers", the "Wailing Rudeboys" and then were the "Wailing Wailers" when producer Coxsone Dodd discovered them. Settling on the name "Wailers" in time for their first #1 Jamaican hit, "Simmer Down" in 1964.


The first version of "One Love" from their 1965 LP "The Wailing Wailers" a joined the rising tide of reggae on radio. "One Love" had used some elements of the Curtis Mayfield written "People Get Ready" but because copyright law was not enforced in Jamaica, he did not get credit.

1966 brought big changes when Braithwaite, Smith & Kelso left the band then Bob married Rita Anderson and moved to Delaware where his mother lived. He worked as a Du Pont lab assistant and also for Chrysler on the assembly line. This lasted a short time and he returned to Jamaica where he converted to Rastafari and grew his dreadlocks. He also embraced cannabis, "the healing herb" that he considered to be a vital factor in religious growth.


Reggae was progressing and near the end of the 60's, and this time the beat was slowed down. The change was reflected in The Maytals "Do The Reggay" produced by Leslie Kong who is considered to be an architect of the new reggae. Marley approached Kong and began working on songs with this new slower, ticking beat.The 70's brought more changes with Marley signing with CBS Records in 1972, but then jumping ship and signing with Chris Blackwell's Island Records.


Rolling Stone magazine heralded Bob Marley & The Wailers as the 1976 Band Of The Year. "One Love" was re-recorded for his 1977 opus "Exodus" but the title now included the Mayfield credits and became known as "One Love/People Get Ready" to properly assign copyright law. It was a #1 hit in New Zealand and peaked at #5 in the UK.


It was at this time that Marley was diagnosed with Acral Lentiginous Melanoma, a serious skin cancer that eventually took his life on May 11, 1981. The world grieved the death of the man who had done so much to shape and bring Reggae to the masses.


His popularity surged after his posthumously released 1984 Legend compilation where "One Love/People Get Ready" was included. Two promotional videos were shot as a result. Don Letts directed the official video that included Paul McCartney. The second video, commissioned by the Estate Of Bob Marley in 2014 crowd sourced his fans and compiled the clips of them singing and performing to the iconic song.

This one was just too irresistible to pass up for a remix. 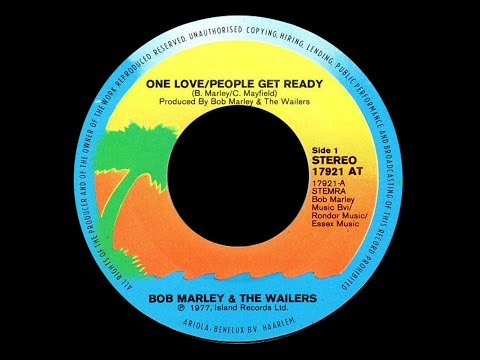 Happy Sunday night! Something I hope that will calm you, it worked for me! I had to get this one out there by tonight, it's my first Bob Marley remix ...