"It's Nobody's Fault but Mine" or "Nobody's Fault but Mine" is a song first recorded by gospel blues artist Blind Willie Johnson in 1927. It is a solo performance with Johnson singing and playing slide guitar. The song has been interpreted and recorded by numerous musicians in a variety of styles, including Led Zeppelin on their 1976 album Presence.
"It's Nobody's Fault but Mine" tells of a spiritual struggle, with reading the Bible as the path to salvation, or, rather, the failure to read it leading to damnation. Johnson was blinded at age seven when his stepmother threw a caustic solution and his verses attribute his father, mother, and sister with teaching him how to read. The context of this song is strictly religious. Johnson's song is a melancholy expression of his spirit, as the blues style echoes the depths of his guilt and his struggle. An early review called the song "violent, tortured and abysmal shouts and groans and his inspired guitar playing in a primitive and frightening Negro religious song".
In performing the song, Johnson alternated between vocal and solo slide-guitar melody lines on the first and second or sometimes third and fourth strings. Eric Clapton commented: "That's probably the finest slide guitar playing you'll ever hear. And to think that he did it with a penknife, as well." Johnson's guitar is tuned to an open D chord with a capo on the first fret and he provides an alternating bass figure with his thumb.
"It's Nobody's Fault but Mine" was one of the first songs recorded by Johnson for Columbia Records. The session took place in Dallas, Texas, on December 3, 1927. Columbia released it as his second single on the then-standard 78 rpm record format, with "Dark Was the Night, Cold Was the Ground" as the second side. In the 1930s, the single was also issued by Vocalion Records and other labels. In 1957, the song was included on the Folkways Records' compilation album Blind Willie Johnson – His Story, with narration by Samuel Charters. Over the years, it has been included on numerous Johnson and blues compilations, including The Complete Blind Willie Johnson (1993), the comprehensive CD set of his recordings for Columbia. 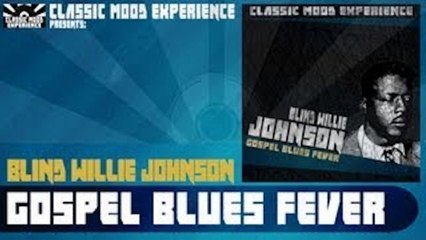 Classic Mood Experience The best masterpieces ever recorded in the music history. Join our Youtube: https://goo.gl/8AOGaN Blind Willie Johnson - It's ...