Bitter Victory movie trailer (1957) - Plot synopsis: In North Africa during World War II, Major David Brand is assigned to lead a British commando raid into German-held Benghazi to retrieve whatever documents they can lay their hands on at the German headquarters. His number two will be Capt. Jimmy Leith who speaks Arabic fluently and knows Benghazi well. Brand also learns that his beautiful wife Jane and Leith were lovers before the war, creating tension between the two. Brand is untested in battle and freezes at a critical moment, losing the respect of his men. After the raid, the trek back is arduous and takes its toll on the men. It also results in only one of the two senior officers surviving.
Director: Nicholas Ray
Writers: René Hardy, Nicholas Ray, Gavin Lambert
Stars: Richard Burton, Curd Jürgens, Ruth Roman 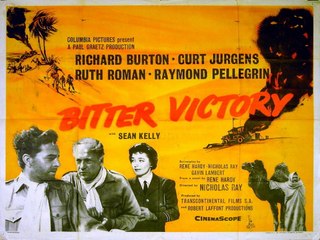