The First Feature Film in Technicolor: Becky Sharp - Set against the background of the Battle of Waterloo, Becky Sharp is the story of Vanity Fair by Thackeray. Becky and Amelia are girls at school together, but Becky is from a "show biz" family, or in other words, very low class.

Storyline:
In the early nineteenth century, Becky Sharp and Amelia Sedley are the two graduates in the current class of a girls' boarding school in Britain. While popular Amelia has a promising future, hard Becky, from a poor background, has no prospect at all, that is until Amelia, out of kindness, and her brother Joseph take her in until she can land on her own two feet. Believing her education useless beyond learning the social graces, Becky begins a systematic pursuit of climbing the social ladder, using connections through Amelia, those learned social graces, and the manipulation especially of men by using her flair for the dramatic, this all set against the backdrop of the Battle of Waterloo which involves many of the men in question. While Becky does end up marrying Rawdon Crawley arguably for love, it is her ambition for money and acceptance into the upper echelons of the British social class that may get the better of her.

Reviews:
""Becky Sharp" of historical interest for film buffs:
The 1935 film "Becky Sharp" remains important chiefly for being the first major movie shot in Technicolor. The story is an abridged version of William Makepeace Thackeray's 19th Century novel "Vanity Fair." Becky Sharp is the main character of the book and is a social-climbing hussy with few redeeming qualities, except for her good-looks. Thackeray didn't judge her too harshly, however. He was more interested in satirizing British society, in general. "Vanity Fair" was indeed his greatest work although he's also known for writing "The Memoirs of Barry Lyndon" which Stanley Kubrick brought to the screen in the mid-1970's.

Miriam Hopkins may have been a bit old to be playing the conniving Becky Sharp but she gives it her best shot. Unlike the novel, Hopkins' character is at least somewhat justified in her decision-making process even while retaining the frivolous part of her personality. The key scene in the film is near the end when director Rouben Mamoulian re-enacts the famous Duchess of Richmond's ball at her Brussels estate on the eve of the Battle of Waterloo. It's done with a definite flair for the dramatic along with some well-placed historical references. The ominous sounds of war are heard in the distance as the great ball comes to a premature end; its frightened participants running off into an uncertain future.

The cast is filled with some familiar faces from the past. Beautiful Frances Dee livens up the screen as Becky's good pal Amelia. Nigel Bruce, best remembered for playing Doctor Watson alongside Basil Rathbone's Sherlock Holmes, does some adequate work as one of Becky's admirers. Sir Cedric Hardwicke is also around as a British aristocrat with a roving eye for the ladies. Recently, Reese Witherspoon tried her luck in the role of Becky Sharp in the 2004 film version of "Vanity Fair" with mixed results. At least she was young enough for the part."-Written by chuck-reilly 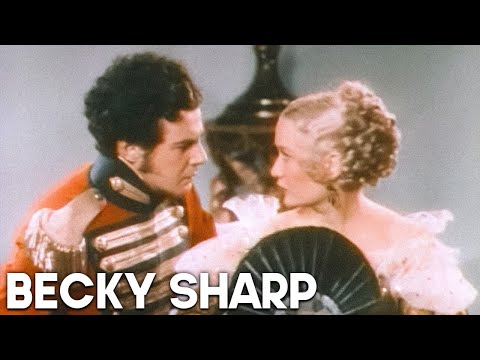 The First Feature Film in Technicolor: Becky Sharp - Set against the background of the Battle of Waterloo, Becky Sharp is the story of Vanity Fair by ...