Aretha Franklin + The Backstreet Boys - Chain Of Fools - VH1 Divas Live: The One and Only Aretha Fra

"Chain of Fools" is a song written by Don Covay. Aretha Franklin first released the song as a single in 1967 and subsequently it appeared on many of her albums.

In 1969, Finnish jazz singer Carola tried out rhythm & blues, recording a television video of "Chain of Fools". The tongue-in-cheek choreography by Heikki Värtsi included girl group dancing and Carola whipping a man in a cave.[6][7]
In 1969 jazz flutist Herbie Mann covered the song on his album Memphis Underground
British Heavy Metal band Tank covered the song on their 1984 album Honour & Blood.
In 1987, the Bulgarian singer Camellia Todorova, also known as Camy Todorow, did a cover version of the song, included in her eponymous 7" single.
In 1989 the Spanish singer Germán Coppini did a cover version of this song called Barbazul for his second solo album, Flechas Negras.
Carol Grimes also covered the song on her 1989 album Why Don't They Dance.
"Chain of Fools" was one of the soul songs covered by the 1990 Irish film The Commitments. It was sung by The Commitments band's female singers "The Commitmentettes" and features in the movie's self-titled soundtrack album.
In 1990 the American hard rock band Little Caesar covered the song on their self-titled debut album.
Clint Black with The Pointer Sisters also covered the song on the 1994 album project Rhythm, Country and Blues.
A blues boogie version by R. L. Burnside appears on his 2000 album Wish I Was in Heaven Sitting Down.[8]
High & Mighty covered the song on their 1999 single.
In 2000 Australian rock artist Jimmy Barnes did a cover version of this song for his live album Soul Deeper.
In 2001 the American rock band Lit made a cover of the song for their album Atomic, where it is a bonus song.
In 2001, Italian group Zu covered the song with Eugene Chadbourne and Roy Paci on the 2001 album Motorhellington.
A German version, entitled Schön, Schön, Schön, was published in 2003 by the German soul singer Stefan Gwildis.
In the 2003 film School of Rock, the character Tomika (played by Maryam Hassan) performs part of the song as an audition to become a backing singer in the band.
Fantasia Barrino performed a cover of the song on American Idol 3 (2004) and later included a studio version in her debut single "I Believe"[9] (but not included in her debut album Free Yourself).
Joe Cocker covered the song on his 2004 album Heart & Soul
In 2005, cover version "Chain of Fools: Revisited" appeared on the album Timeless Playground by Milto Eph.
Brazilian singers Pitty and Negra Li covered the song on 2007 EP Estúdio Coca-Cola - Pitty e Negra Li
A version by Eva Cassidy appears on her 2008 album Somewhere.
On American Idol season 7 (2008), contestant Syesha Mercado sang this song during Hollywood week.
Nicole Scherzinger samples "Chain of Fools" in the New Kids on the Block song "Grown Man", from their 2008 album The Block.
2009 Blues Music Award Nominee Jean Shy and her band The Shy Guys performed, and recorded this song live at an Open Air Concert in Du

Aretha Franklin + The Backstreet Boys - Chain Of Fools - VH1 Divas Live: The One and Only Aretha Fra 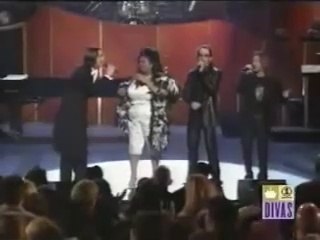 "Chain of Fools" is a song written by Don Covay. Aretha Franklin first released the song as a single in 1967 and subsequently it appeared on...