The 53rd Annual Grammy Awards were held on February 13, 2011, at the Staples Center in Los Angeles. They were broadcast on CBS with a rating of 26.6 million viewers. Barbra Streisand was honored as the MusiCares Person of the Year two nights prior to the telecast on February 11. Nominations were announced on December 1, 2010 and a total of 109 awards were presented. Most of the awards were presented during the pre-telecast, which took place at the Los Angeles Convention Center next to the Staples Center, where the main telecast took place. The eligibility period was September 1, 2009 to September 30, 2010.[2]

For the third year, nominations were announced on prime-time television as part of "The GRAMMY Nominations Concert Live! – Countdown to Music's Biggest Night" a one-hour special broadcast live on CBS from Club Nokia at L.A. Live.

Arcade Fire won Album of the Year for The Suburbs becoming the first indie act to do so,[3] and surprising many viewers and critics.[4] Baba Yetu composed and arranged by Christopher Tin won Best Instrumental Arrangement Accompanying Vocalist(s), is the first Grammy given to a piece of music written for a Video Game.[5] Esperanza Spalding was awarded Best New Artist. Lady Antebellum won five awards including Record of the Year and Song of the Year for "Need You Now". Other multiple winners include: David Frost, John Legend, Lady Gaga, Jay-Z, and Jeff Beck with three awards each. The Black Keys, Eminem, Herbie Hancock, Alicia Keys, The Roots, Usher, Christopher Tin and BeBe Winans won two awards each.[6]

The television broadcast of the 53rd Grammy Awards marked the last awards show for the Grammy's executive producer, John Cossette, before his death on April 26, 2011. 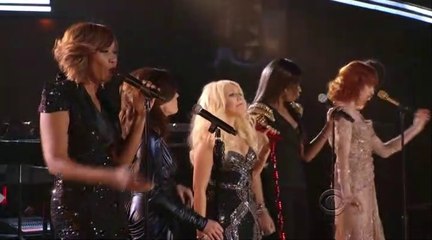