Aretha Louise Franklin (March 25, 1942 – August 16, 2018) was an American singer, songwriter, actress, pianist, and civil rights activist.[2] Franklin began her career as a child singing gospel at New Bethel Baptist Church in Detroit, Michigan, where her father C. L. Franklin was a minister. At the age of 18, she embarked on a secular-music career as a recording artist for Columbia Records. While Franklin's career did not immediately flourish, she found acclaim and commercial success after signing with Atlantic Records in 1966. Hit songs such as "I Never Loved a Man (The Way I Love You)", "Respect", "(You Make Me Feel Like) A Natural Woman", "Chain of Fools", "Think", and "I Say a Little Prayer" propelled her past her musical peers. By the end of the 1960s, Aretha Franklin had come to be known as the "Queen of Soul".A memorial service was held at New Bethel Baptist Church on August 19.[163] Thousands then paid their respects during the public lying-in-repose at the Charles H. Wright Museum of African American History.[164] The August 31 Homegoing Service held at Greater Grace Temple in Detroit, included multiple tributes by celebrities, politicians, friends and family members and was streamed by some news agencies[165] such as Fox News, CNN, The Word Network, BET and MSNBC.[166] Among those who paid tribute to Aretha at the service were Ariana Grande, Bill Clinton, Rev. Al Sharpton, Louis Farrakhan, Faith Hill, Fantasia, The Clark Sisters, Ronald Isley, Angie Stone, Chaka Khan, Jennifer Holliday, Loretta Devine, Jennifer Hudson, Queen Latifah, Shirley Caesar,[167] Stevie Wonder, Eric Holder, Gladys Knight, Cedric the Entertainer, Tyler Perry, Smokey Robinson, and Yolanda Adams.During the American Music Awards on October 9, 2018, the show was closed by bringing Gladys Knight, Donnie McClurkin, Ledisi, Cece Winans, and Mary Mary together to pay tribute to Aretha Franklin. The "all-star" group performed gospel songs, including renditions from Franklin's 1972 album, Amazing Grace.[205][206]

At the 61st Annual Grammy Awards, the ceremony was ended with a memorial tribute to the life and career of Franklin. The tribute concluded with a rendition of her 1968 hit, "A Natural Woman (You Make Me Feel Like)," performed by Fantasia Barrino-Taylor, Andra Day and Yolanda Adams. 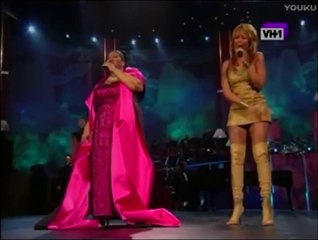