Aretha Louise Franklin (March 25, 1942 – August 16, 2018) was an American singer, songwriter, actress, pianist, and civil rights activist.[2] Franklin began her career as a child singing gospel at New Bethel Baptist Church in Detroit, Michigan, where her father C. L. Franklin was a minister. At the age of 18, she embarked on a secular-music career as a recording artist for Columbia Records. While Franklin's career did not immediately flourish, she found acclaim and commercial success after signing with Atlantic Records in 1966. Hit songs such as "I Never Loved a Man (The Way I Love You)", "Respect", "(You Make Me Feel Like) A Natural Woman", "Chain of Fools", "Think", and "I Say a Little Prayer" propelled her past her musical peers. By the end of the 1960s, Aretha Franklin had come to be known as the "Queen of Soul".
Aretha's father's emotionally driven sermons resulted in his being known as the man with the "million-dollar voice". He earned thousands of dollars for sermons in various churches across the country.[21][22] His celebrity status led to his home being visited by various celebrities. Among the visitors were gospel musicians Clara Ward, James Cleveland, and early Caravans members Albertina Walker and Inez Andrews. Martin Luther King Jr., Jackie Wilson and Sam Cooke all became friends of C. L. Franklin, as well.[23][24] Ward was romantically involved with Aretha's father from around 1949 to Ward's death in 1973, though Aretha "preferred to view them strictly as friends".[25] Ward also served as a role model to the young Aretha.
During the American Music Awards on October 9, 2018, the show was closed by bringing Gladys Knight, Donnie McClurkin, Ledisi, Cece Winans, and Mary Mary together to pay tribute to Aretha Franklin. The "all-star" group performed gospel songs, including renditions from Franklin's 1972 album, Amazing Grace.[204][205]

At the 61st Annual Grammy Awards, the ceremony was ended with a memorial tribute to the life and career of Franklin. The tribute concluded with a rendition of her 1968 hit, "A Natural Woman (You Make Me Feel Like)," performed by Fantasia Barrino-Taylor, Andra Day and Yolanda Adams.[211] 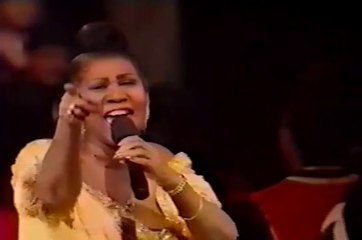