The Special Event Will Be Hosted By Eve With Highlight Performances By Nelly, Ashanti, A Labelle Reunion And More

Grammy Award-winning artist Patti LaBelle celebrates her 45 years in the music industry in the one-hour special, AN ALL-STAR SALUTE TO PATTI LABELLE: LIVE FROM ATLANTIS, to air Tuesday, Nov. 8 (9:00-10:00 PM, ET/PT) on UPN.

This exceptional night will be hosted by Eve and as a tribute to LaBelle, her hits will be performed by Big Boi from Outkast, Nelly, Kelly Rowland, Michael McDonald, Ashanti, Boyz II Men, Mario, Gerald Levert, and a rare reunion of LaBelle�s legendary 70�s group, "Labelle," all from Atlantis, Paradise Island Resort in the Bahamas.


� Mario performing "Somebody Loves You" with Patti LaBelle

� Boyz II Men singing "If You Asked Me To"

� Michael McDonald performing "On My Own" with Patti LaBelle

� All Stars "You Are My Friend"

LaBelle will also take part in a special performance of "Lady Marmalade" with Nona Hendryx and Sarah Dash, back together as "Labelle" for the first time in five years.

Atlantis, with its vast waterscape, including the world�s largest open-air marine habitat, waterslides and powder-white beaches, has long been a favorite destination of celebrities. Atlantis has played host to many concerts and productions, but this is the first time the resort will have such a large roster of world-renown talent all participating in the same event. 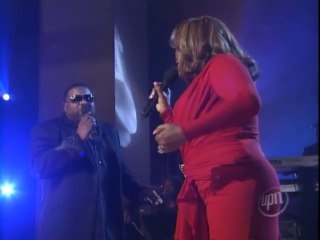 The Special Event Will Be Hosted By Eve With Highlight Performances By Nelly, Ashanti, A Labelle Reunion And MoreGrammy Award-winning artist Patti LaB...