15 behind the scenes photos that spoiled the movie for fans
Subscribe: http://bit.ly/Subscribe-to-Screenrant

Warning: spoilers lie ahead! You already knew that though, right? The whole point of this video is to discuss all those famous set photos that spoiled great movies before they even illuminated the silver screen. Okay, so not every one of these entries involve set photos that spoiled theatrical debuts, but you’ll see what we mean.

In the armada of classics, certain films no longer get their big twist moment. The big reason for this is the fact set photos from their productions are widely distributed across the internet nowadays. The famous shower scene in Psycho, special characters in Ghostbusters, the end to The Shining, and even parts of Alien no longer pack the same umph thanks to set photos with major spoilers. Of course, classic films are only part of the equation.

We also want to hit on the new brand of armchair detective that takes those basic set photos and manages to find huge spoilers in movies. Men in Black, Harry Potter and the Order of the Phoenix, Star Wars: The Last Jedi, and The Matrix were all movies that fell victim to leaving little to the imagination in their promotional photos. Then again, their errors weren’t nearly as obvious as Revenge of the Sith, The Avengers, Titanic, Iron Man 3, or The Dark Knight which deflated big moments in their movies with behind-the-scenes images. Side note, Quentin Tarantino’s productions seem to be super culpable here with films like Django Unchained and Kill Bill showing he repeats this mistake over and over again.

Anyways, it’s all this and more on the latest video from ScreenRant!


Check out the Behind The Screen Podcast - By Screen Rant on Spotify!
https://open.spotify.com/show/6sMJkP1E4N7kPYL5v9OW3v 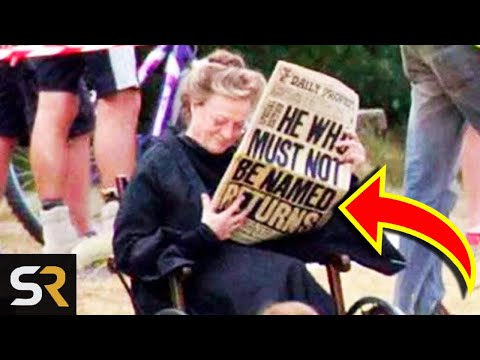 15 behind the scenes photos that spoiled the movie for fans Subscribe: http://bit.ly/Subscribe-to-Screenrant Warning: spoilers lie ahead! You already ...