Drona spreads fear and destruction in the Pandava army. He seems invincible but Krishna tells Yudhistir and Arjun that Drona can be defeated. “If he were to hear that his son, Ashwathama is dead, he would lose interest in life and throw down his weapons”, says Krishna. Yudhisthir consults Bheem who kills a huge elephant that was also named Ashwathama. Bheem roars, “I’ve killed Ashwathama”. Drona hears his word and shouts back, “I will not take your word for it, let Yudhisthir say so.” Yudhisthir repeats, “Ashwathama is dead” and then he mutters to himselkf, “Ashwathama, the elephant”. Upon hearing Yudhishthir, Drona lays down his weapons and is killed.

Mahabharat is an Indian television series based on the Hindu epic. 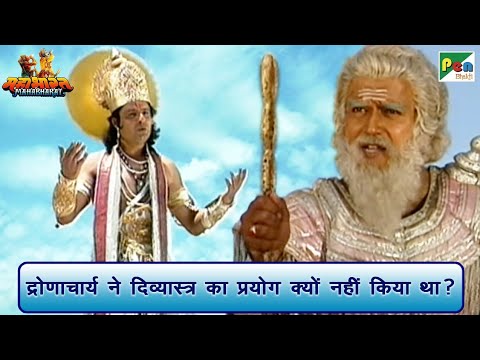